Supply & Demand in the "Just Because"


This quote written on the whiteboard in my office has been haunting me in a way for over year.  Not in a scary or bad way “haunting”, but rather in the sense that it’s continuously occupied my thinking about service delivery -- especially in a world that has become dominated by a supply and demand chain that has become predominately driven by the “just because”    NetFlix and Amazon were really among the first to capitalize on the digital (& not neccessarily physical) longtail by creating and pairing massive universal catalogs with a robust user recommendation engine.  The result is a profound shift in supply chain model, that eliminates the need to physically create “supply”  first for a service model that is merely triggered  by a “just because demand.”
For the past century, supply model economics (including those in building library collections) have effectively shifted from “just in case”  (creating and building inventories for a future use)  to a “just in time” (acquiring inventory to meet forecasted and actual demand).  But in a world, where inventory and product can literally be manufactured on the fly,  the supply chain process becomes less and less important to having systems and processes in place to react and provide on demand transactions for services that are trigger by a  “just because.” 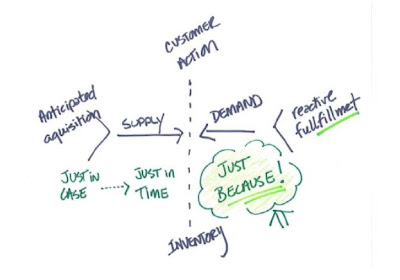 And just last week, this thought came up again in an interview I did with Dquarium's Bibliotech webcast, also appropriately titled "Just Because"

Posted by HeleneB at 10:57 PM
Email ThisBlogThis!Share to TwitterShare to FacebookShare to Pinterest

I think that comes as a consequence of developing technology. With industries getting streamlined, management is shifting from merely keeping tabs of finished products to keeping tabs of everything that comes out to make sure nothing is lost profit-wise. Things are moving too fast that it's hard to keep track of what's really being accomplished.