As expected these three really got you thinking and you could tell the room of 300+ was energized by all the nodding heads, comments and eye speak. Although I had my laptop with me and there was wireless (Yippee!), I opted not to blog the event live and instead just sit back and listen.

My scribbles on the back on the handout were few, but there was one thing Stephen Abrams said early on that stuck with me …

“Libraries are transformational, NOT transactional!”

This simple sentence says it all ... Libraries aren’t about processes, checkouts or references stats. They’re merely about providing users with an empowering experience.

My other mental notes from today include: 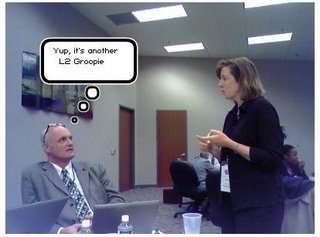 The comment bubble is my addition, not Michael's (mocked up in Bubblr). Anyway … a GREAT day of thought provoking dialogue and conversations. Thank you Patti and Deborah!!!

Looking for more? The team from SCPL did a great job blogging all the presentations. and Curtis Roger's even posted YouTube videos - cool!

Posted by HeleneB at 10:01 PM
Email ThisBlogThis!Share to TwitterShare to FacebookShare to Pinterest

In case you need another example of a great site that would be forbidden under DOPA (I know that you don't), check this one out:

Maybe if we could relate all of our objections to things politicians can understand (like sports, for example) they'd see the light.